Well I seem to have started a trend here in the north island….I started out from Wellington at 8:00 AM and I was supposed to arrive in Taupo around 2:00….until we hit the Desert Highway and were turned back due to a lahare. What exactly is a lahare you might ask? Yes, for a while I was sitting on the bus thinking the same thing, but thankfully there was a native kiwi on board who was able to explain that the crater lake, which is located in the crater of an active volcano, has been set to overflow and they have a warning system in place to alert them if it starts to overflow. So the lahare is basically a wall of rocks, mud and boiling hot water flowing down the side of the mountain overflowing from the boiling hot water of the lake. Glad we didn’t encounter it except my long bus ride was extended to be an all day adventure as I had to go back and circle around and I didn’t arrive until 8:00 PM in Taupo after taking 3 different buses to get to where I wanted to be. Always an adventure! 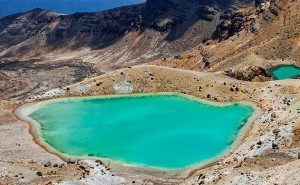 I signed up and decided to hit the hay early as the bus picks you up at 5:00 AM. Ouch! I was looking forward to the challenge of this hike. Even though I was doing this on my own there were at least two bus loads of people on the trail so I was never really alone. The weather still wasn’t that clear, unfortunately and I had the extra challenge of bracing myself against 60 KPH winds at the summit but I don’t regret a thing.

After nearly an hour’s bus ride to reach the start of the trail the entire bus started off. The path started out rather easy through a valley and then we hit the first challenging part called the Devil’s Teeth as you are climbing up the sides of the rocks to reach the base of Mt. Doom. Okay, that’s not the real name of the mountain but it is the mountain that was used in the Lord Of The Rings films to portray Mt. Doom so that’s what I call it. And yes, I can’t pronounce nor do I remember the real name. From here we forged on through the Red Crater passing a brilliant blue sulphuric lake to climb yet again to the top of a very windy, narrow precipice where if I weren’t surrounded by a cloud I would imagine the views WOULD have been great….The descent was a rather scary steep drop of gravel where you sort of rock surfed down past some more sulphuric lakes and then made another much more gentle ascent to the Blue Lake, which was SUPER windy and I was almost blown off of the path. I had a minor fall, thankfully no one was around to see me as it was a bit embarrassing, in fact, I’m not sure why I’m mentioning it. Anyhow, from here it was an easy descent to the hut where I stopped to eat some snacks and replenish my energy. From here I headed past some more sulphuric springs, phew! This was the point where I realized that I should have used the toilet at the hut. So I started moving faster, I probably had another hour to go at this point. I didn’t feel as though it would be right to use a tree so I ended up running towards the end once I was below the tree line. Wish I had more time to enjoy the scenery, of course I ended up following a babbling brook towards the end, not the best thing when you are in need of a toilet, so I just picked up the pace. I had never been so glad to see an outhouse in all my life!!! I started my hike at 7:15 AM and finished at 1:20 so it took me just over 6 hours.

The bus brought us back to Taupo by 3:00 and my body started to realize what I had just put it through. I was EXHAUSTED! I managed to do some laundry and then had the pleasant surprise of finding Linda at the hostel! She wasn’t staying there, she was in town staying with friends but it was so cool to see her again! I was so used to seeing her that my week spent without her had not quite felt right. We made plans to go out the next night as I was out for the day and she was doing the crossing early the next morning.

The next day I did a nice, easy hike out to Hauka Falls where I went a little further and visited the Honey Hive, a place where they have gourmet honeys and mead, wine made from honey. I bought some apricot wine, which was really good! Linda and I met up later that evening and we went out for quiz night at the local bar. Very fun but I felt rather stupid as I didn’t know any of the answers, they make those things really difficult! I was impressed with Linda’s ability to stand as she had just completed the crossing that day and I knew from previous experience that I was in no shape to be out the night after doing the hike.

Posted on Monday, May 25, 2015 by New Zealand Guide in Blog | Leave a Comment
More like this: Tags: Mt. DoomTaupo